On  April 16th Amir ElSaffar premiered a new work, Not Two, with his Rivers of Sound ensemble to a standing-room only audience at the David Rubenstein Atrium at Lincoln Center. The 17 member ensemble featured artists from all over the world from traditions ranging from American jazz to Iraqi maqam weaving an intense sonic landscape that left the audience mesmerized and roaring with applause. Following the performance the ensemble headed into the studio to work on the Rivers of Sound debut album to be released in Spring 2016. View photos of the Rivers of Sound ensemble here.

On Thursday, April 16th Amir ElSaffar will premiere a new work, Not Two, with his Rivers of Sound ensemble. The ensemble features 17 musicians from a broad spectrum of traditions, from maqam to American jazz.  Using resonance as its governing principle, the music incorporates elements of maqam modal music of the Middle East with jazz and other contemporary musical practices to create a unique microtonal musical environment that moves beyond the notions of style and tradition into a realm of uninhibited musical communication. Click here for details.

Amir ElSaffar returned to Newport Jazz Festival for the second year in a row this time with his quintet featuring John Escreet, Francois Moutin, Dan Weiss, and Ole Mathisen. Check out these great photos of the group by Adam Kissick for NPR Music! 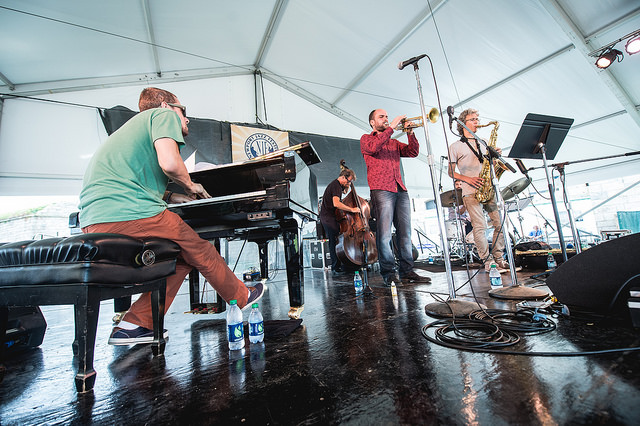 Photo by Adam Kissick for NPR

Along side the likes of Gerald Clayton, Robert Glasper, Esperanza Spalding and Ambrose Akinmusire, Amir ElSaffar was listed as one of the “coolest” artists of the next generation of jazz. Read more in Downbeat.