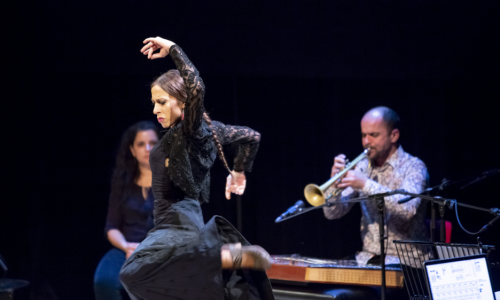 ElSaffar is composer-in-residence at the Royaumont Foundation in France, which has partnered with the Flamenco Biënnale Nederland et le Festival Haizebegi de Bayonne in commissioning this new work. For this project, ElSaffar has created an ensemble consisting of the new vanguard of boundary – pushing Flamenco performers, including Gema Caballero, a rising star vocalist who has one of the most distinct voices on the scene, Vanesa Aibar, a Flamenco dancer who goes beyond conventions of the form, creating a highly personal movement and percussionist Pablo Martin Jones, who has worked with almost every major Flamenco musician today. The ensemble also includes mastermind electronics musician/composer, Lorenzo Bianchi Hoesch, as well as Amir’s sister, Dena El Saffar, who plays violin and traditional Iraqi fiddle.

“I am interested in finding a sound that resonates deep within the well of human feeling, keeping the conduits of the heart open. I am seeking the sound that emanates from an ancient, timeless past, yet is of this present moment, where individual, personal experience parallels larger consciousness.

It’s not about merging languages and traditions, or cross-cultural collaboration. When we expand beyond song forms and allow ourselves to spill over the established routes of tradition, we can find something magical, eternal, yet ephemeral, an inherent state of human connectedness.

In the frequencies and overtones of the Flamenco voice, the subtle nuance, and the melismas there is a feeling – as the lines progress, different characters, emotions, nuances, archetypes, epochs bubble to the surface and recede, giving way to others, flowing, each moment something new. It is Flamenco, but at the same time is connected to a universal sound beyond all notions of form or tradition, free of all forms of temperament.

In the subtle microtones of Arabic maqam and the modes and Flamenco, in the turnings of the compass, the deep duende and ecstatic tarab (musical ecstasy), we have the possibility to reach the state that is grounded, of the corporeal, yet of a transcendent nature.”