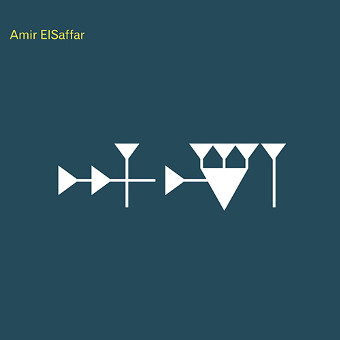 Inana is the follow-up to trumpeter Amir ElSaffar’s critically acclaimed Two Rivers Ensemble release, Two Rivers (2007), which Allmusic.com called “as impressive a debut as we’ve had in America in the 21st century.” While Two Rivers combined elements found in the modal music of the Iraqi maqam with the rhythms and aesthetics of modern jazz, Inana builds on those concepts to include a microtonal harmonic and melodic language, influenced by the pitch-flexibility of Middle Eastern music. The result is a new work that further expands the sonic possibilities of jazz.

The first eight tracks of the album make up the “Inana Suite”, named after and inspired by the ancient Mesopotamian goddess of carnal love and warfare. The CD cover features her name in Sumerian cuneiform script, and the eight-pointed star on the back cover represents her association with the planet Venus. Inana is a powerful and unpredictable deity, often creating chaos around her and disrupting the otherwise orderly pantheon of Sumerian gods. The suite attempts to capture the complexity of Inana’s spirit, and many of the compositions are inspired by specific myths or aspects of her being. The suite progresses from “Dumuzi’s Dream,” which directly combines jazz with maqam, to pieces not based on the maqam tradition such as “Infinite Variety,” which expresses Inana’s diverse character through six independent melodies layered in counterpoint. The work culminates with “Journey to the Underworld,” a composition in seven sections, each depicting a part of Inana’s epic tale that inspired similar myths in subsequent ancient cultures and remains a topic of discussion in modern psychology.