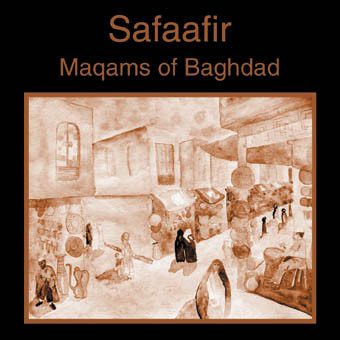 Safaafir is the only US-based ensemble dedicated to performing the Iraqi maqam. The group is led by two American-born siblings of Iraqi descent, Dena and Amir ElSaffar, both of whom have backgrounds in Western music but eventually found their way into Iraqi music. Dena and Amir discovered Arabic and Iraqi music independently of one another, and it wasn’t until 2005, at the suggestion of Dena’s husband, percussionist Tim Moore, that the three decided to form a maqam trio. Prior to that, Dena and Tim had been performing together in Salaam, an Arab/Middle Eastern ensemble founded by Dena in 1992 that continues to perform actively today. The three named the group Safaafir, meaning coppersmiths, in homage to Amir and Dena’s ancestry and namesake (Saffar translates from Arabic to coppersmith). The group has performed actively for Iraqi, Arab, and American audiences across the United States and internationally. In addition to presenting the maqam in its traditional format, Safaafir incorporates jazz, classical and other Middle Eastern styles to create a highly unique and personalized sound.

About the Iraqi Maqam