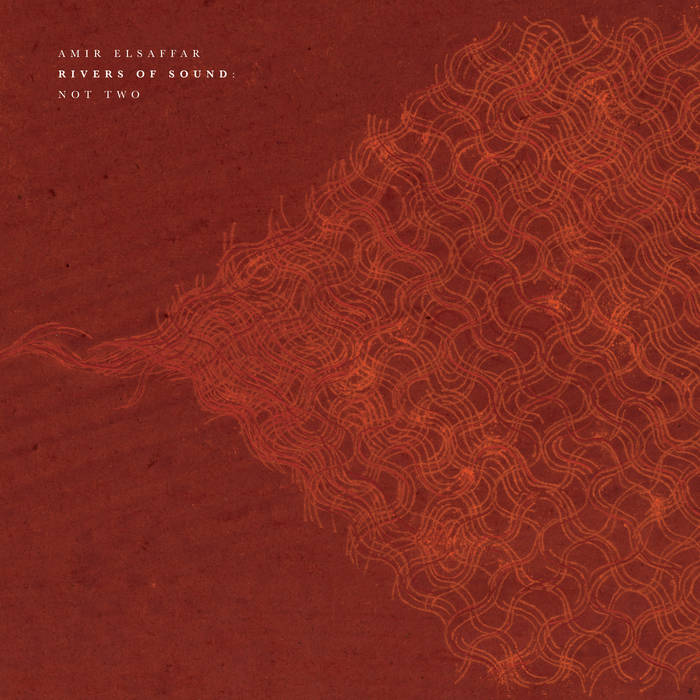 “Trumpeter and composer Amir ElSaffar delivers an epic statement on his latest outing. On Not Two, he expands his Two Rivers Ensemble into the 17-piece Rivers of Sound orchestra, and in doing so, creating a convergence of modern jazz and Middle Eastern music, where the harmonic conventions of NYC jazz and the melodic improvisations of maqam are exhaled in the same breath from the Iraqi-American’s pieces. ElSaffar’s Rivers of Sound orchestra makes it seem like an everyday occurrence for oud and saxophones, buzuk and trumpet, and santur and cello to mingle in the same crowd, and take part in the same communal conversation. Drawing out the similarities between these musics has been part of ElSaffar’s story arc over his last few albums. His latest feels like that story’s denouement.” —Dave Sumner, Bandcamp Daily “The Best Jazz on Bandcamp: June 2017”

“The one thing that wide range of spectators can agree on is performances to which you can’t help but say, “Wow” (or “Awesome,” as one wide-eyed listener characterized a tabla solo during Amir ElSaffar’s Rivers of Sound set).” —Natalie Weiner, Billboard “Best Moments from the 2017 Newport Jazz Festival

“Using resonance as its guiding principle, music incorporates elements of modal maqam music from the Middle East with jazz and other contemporary practices to create a unique microtonic environment that surpasses the notions of style and tradition in a field of uninhibited musical communication.” —Alex Dutilh, France Musique (France)

“The fact that Amir ElSaffar seemed to have been building to this moment makes the result no less stunning or the statement any less epic… there are moments on this album that are as powerful as anything that came out in 2017.” —Dave Sumner, Bird is the Worm “Best of 2017”

“I’ve found soul in ElSaffar’s compositions and responsiveness in his arrangements. It’s perceptible that these tunes never close doors to exploration and new possibilities. Regardless the great individual moments, the main force of Not Two comes from the collective whose members, unselfishly and victoriously, walk in the same direction.” —Filipe Freitas, Jazz Trail “Best Jazz Albums of 2017”

“ElSaffar’s orchestra brings together 17 musicians—yes—17—from all different backgrounds and musical styles, ranging from American jazz to the centuries old–Iraqi maqam. Even with this large number of artists, each member had an opportunity to shine, all while personifying what an ensemble truly is.” —Angelo Santoro, Live Music NYC

“an album for our time: turbulent, restless and packed with poignant solos from a global lineup.” —Lucid Culture, “The 20 Best Jazz Albums of 2017”

“Haunting, dark and incessantly turbulent, it reflects our time as much as it rivets the listener.” —Delarue, Lucid Culture, Album Review

“But the two best sets I heard all weekend were the big-band performances of Amir ElSaffar’s Rivers of Sound Orchestra and the Maria Schneider Orchestra. ElSaffar, an Iraqi-American born in Chicago, weaves Middle Eastern themes and instruments into their North American counterparts with astonishing success. To hear ouds played with a vibraphone or a frame-drum with a drum kit or a bouzouki with a clarinet would be beguiling enough, but ElSaffar’s melodic themes and harmonic development would be seductive with any instrumentation.” —Geoffrey Himes, Paste Magazine “Live Report, Newport”

“It brings multiple musical traditions together by clearly stating them, giving them space, and allowing them to drift together and interact in creative ways. …The music moves at an unhurried pace, carrying the listener along what simply feels like a rolling swell or a gentle surge on its natural course, bringing new ideas and opportunities for musicians and listeners to the surface. It is elevating to the spirit to encounter music and philosophy characterized by such warmth and amenity.” —Jordan Penney, PopMatters

“…stunning…George Ziadeh’s oud, Tareq Abboushi’s buzuq and Jason Adasiewicz’s retuned vibraphone play central roles, creating bright, shimmering textures that give the music a sense of movement and space…. the 16 minute ‘Shards Of Memory/B Half Flat Fantasy’ is the album’s masterpiece, bringing together galloping oud passages, spiralling saxophone exchanges and melismatic vocals. It all builds to an ecstatic free jazz climax, with an inspired coda of early music.” —Stewart Smith, Quietus (UK) “The Best Jazz Albums of 2017”

“…Not Two offers a welcome musical melting of borders… his humanism coupled with the skill of his collaborators results in an album that pulses with mystical jazz spells, thrills with august horns, and reminds us that music is egalitarian. Knowing that Not Two was recorded in one marathon 16-hour session is just the cherry on top of ElSaffar’s accomplishment.”—Rachele Hales, Second Inversion “Top 10 Albums of 2017”

“Give yourself up to and immerse yourself into ‘Not Two’ – the pleasures are endless.” —Richard B. Kamins, Step Tempest

“The piece as a whole blends melodies and rhythms from across the planet into a sprawling, two-hour-plus suite that never loses its grip on the listener. It’s a major, major work — look out for it on year-end lists.” —Phil Freeman, Stereogum

“Not Two’s ninety minutes are overﬂowing with possibilities that reward with each passing listen” —Boice, Talk Music Talk

“On Not Two ElSaffar continues to develop his musical language, expanding his Two Rivers sextet into the 17-piece Rivers Of Sound Orchestra, a transcultural outfit featuring musicians from the US, the Middle East and Southern India. The results are stunning.” —Stewart Smith, The Wire (UK)