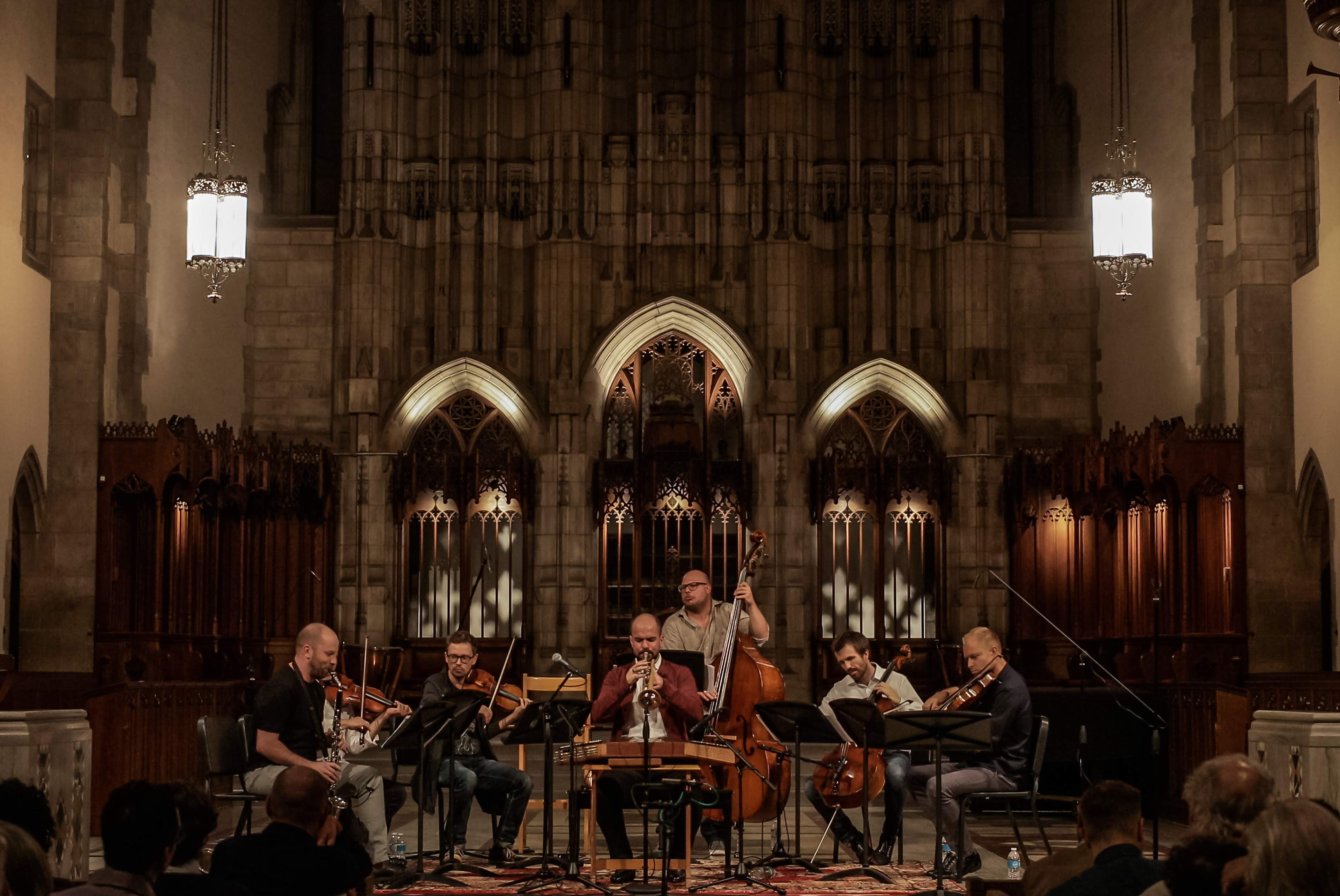 Ahwaal, for string quartet, bass, clarinet, trumpet, santur, and voice, was commissioned by the Jazztopad Festival in Wroclaw, Poland, where the piece received its world premiere in November, 2018. Ahwaal, meaning “states of consciousness,” is an important concept in Sufism, describing a human being’s spiritual progression toward the divine. The states are said to arise and vanish quickly, as flashes of lightening. The various Ahwaal include joy/fear, ecstasy, intoxication, intimacy, eventually ending in the transcendence of ego-self. Intended as a reflection on these and other Ahwaal, the composition is meditative with repeating rhythmic cycles and a slow development. Each section is a kind of immersion. The music consists of composed and improvised elements, and drawing on the microtonal resonances of Maqam, with a subtle nod to the late quartets of Beethoven.

One of the most sought-after jazz double bassists in Poland, KSAWERY WOJCINSKI activates his gift of lightness, easiness, and musical erudition to switch between different guises and stylistics—from jazz in its more accessible form, through avant-garde, to Polish folk music. Thanks to his regular concerts at the club Pardon, To Tu in Warsaw, where he performed with bands such as Hera and Charles Gayle Trio, in a duo with trumpeter Wojciech Jachna, and solo, Wojciński has become one of the most recognizable jazz musicians in Poland. In 2014, he released his solo album, The Soul, on which he not only played the double bass, piano, and guitar, but also provided vocals. Wójciński has collaborated with Uri Caine (in a trio with Robert Rasz), Charles Gayle (one of the most important personalities in jazz avant-garde in New York), Michael Zerang, Nicole Mitchell, and Marco Eneidi. He was a member of Ad Libitum Ensemble, an improvising orchestra created to play during the Warsaw Improvisation Music Festival Ad Libitum and led by the Spanish pianist Agustí Fernández. He has also performed and recorded with Polish artists including Mikolaj Trzaska, Raphael Roginski, Waclav Zimpel, and the bands Emergency and Hera. Together with the singer Maniucha Bikont, he forms a duo Maniucha i Ksawery and performs traditional music. He also currently performs with the Wójciński/Szmańda Quartet.

Quite simply, WACLAW ZIMPEL is one of the most unique talents to have emerged from Poland this side of the millennium. A multi-instrumentalist, composer, and producer, Zimpel is as inspired by jazz as he is by electronics, minimalism, and roots music from across the world, and doesn’t so much blur boundaries as eradicate them altogether to create a whole new musical language. His Saagara project has seen him successfully bring together the seemingly disparate disciplines of western jazz and Indian raga music across two albums, and his work with improvisational trio LAM aims to bridge the gap between minimalism and trance music. A naturally curious musician who refuses to be boxed in, Zimpel has applied the endless possibilities of electronics and loops to his oeuvre and, as displayed by his growing catalogue of music, is signposting the way for future generations. Zimpel has worked closely with contemporary/free jazz players Ken Vandermark, Hamid Drake, Joe McPhee, famed composer, clarinetist and Grammy award winner Evan Ziporyn, techno producer Rabih Beaini, drum legend Trilok Gurtu, and the master of gnawa music Maallem Mokhtar Gania. Awarded the prestigious City of Poznań Artist Prize, he has also been nominated for the Paszort Polityki, the most important cultural award in Poland.

The LUTOSŁAWSKI QUARTET, whose name refers to the great composer of the 20th century, Witold Lutosławski, was created in 2007 and is currently one of the leading string quartets in Poland. They have performed at such prestigious festivals as Warsaw Autumn, Wratislavia Cantans, Klarafestival in Brussels, Ankara Music Festival in Turkey, Hong Kong Arts Festival, Tongyeong International Music Festival in South Korea, World Music Days, and Jazztopad. They have also appeared in renowned venues such as Kioi Hall in Tokyo, YST Conservatory of Music in Singapore, Hangzhou Theatre, Forbidden City Concert Hall in Beijing, Megaron in Athens, Konzerthaus in Berlin, Bozar in Brussels, SESC halls in São Paulo, Warsaw Philharmonic, and the Witold Lutoslawski Studio in Warsaw. The ensemble has often performed with outstanding artists such as Garrick Ohlsson, Piotr Anderszewski, Kevin Kenner, Bruno Canino, Michel Lethiec, Tomoko Akasaka, Eugen Indjic, Ryszard Groblewski, Andrzej Bauer, and excellent jazzmen Kenny Wheeler, John Taylor, Uri Caine, Benoît Delbecq, Vijay Iyer, and Charles Lloyd. The quartet’s musicians have also collaborated with IRCAM in Paris, recorded for Naxos, DUX, and CD Accord, and been active as a resident ensemble of the National Forum of Music in Wrocław.

ROBERT KWIATKOWSKI studied in Gdańsk, and his life is now largely connected with this music centre. In 2017, he received the honorary badge of the Minister of Culture and National Heritage “Merit for Culture” – a distinction that splendidly sums up his achievements in the field of art and teaching. Robert Kwiatkowski is an artist of extraordinary personality. His charisma and skills win the hearts of the audience, and his professionalism gains the respect and recognition of musicians. His work culture, honesty, and incredible musicality, underlined many times by prominent authorities of the arts world, contribute to the success of his active career. As a soloist, he has performed over forty times with such orchestras as the Beethoven Academy Orchestra, Orquesta Sinfónica de Tenerife, and Kalisz Philharmonic. Daily, he is the concertmaster of the Baltic Philharmonic Orchestra in Gdańsk and is often invited to collaborate in this position by renowned orchestras in Poland and internationally. As a chamber musician, he frequently performs in Poland as well as in Europe and the USA. He has collaborated with the most prominent figures of the Polish music scene, and his interpretations and the ability to capture the essence of music are appreciated by the public at home and abroad. Robert Kwiatkowski is a graduate of the Music Academy in Gdańsk in the violin class, of Prof Krystyna Jurecka and the chamber music class of Prof Anna Prabucka-Firlej. In addition, he mastered his skills under the direction of many outstanding Polish and foreign artists such as Henry Meyer, LaSalle Quartet, and Stefan Kamasa. In 2003, he was appointed concertmaster and director of the Hanseatica Chamber Orchestra, which for its achievements has been awarded repeatedly, and his performances with this ensemble are a very important part of his activities.

Leader of violas with the NFM Wrocław Philharmonic, ARTUR ROZMYSLOWICZ studied at the F. Chopin University of Music with professor Błażej Sroczyński, then received a grant to study a the Guidall School of Music and Drama in London as part of Jack Glickman’s master class. He has taken part in numerous master classes including those in Łańcut (Poland), Pueblo (Mexico), London, Ottawa (Canada), and the Książ Castle. He mastered his skills with artists such as P. Zukerman, M. Tree, S. Kamasa, S. Popov, members of the Guarneri Quartet, the Takács Quartet, the Heine Quartet, and the Silesian String Quartet. He has performed at Warsaw Autumn Festival, International Festival of Chamber Music Ensemble, Wratislavia Cantans, tBeethoven Festival, Chain Festival, La Frentana, Jazztopad, Pacific Music Festival (Japan), tPaxos International Music Festival (Greece), Music on the Heights Festival, Tansmania, Chopin and his Europe, Spaces of Music, and Klara Festival in Brussels. As a chamber musician, he has appeared at theatre festivals such as the Edinburgh Festival Fringe and SESC Belenzinho in São Paulo. He has worked with the London Symphony Orchestra, National Basque Orchestra, Sinfonia Juventus, Polish Radio Orchestra, and World Orchestra for Peace, and given concerts with distinguished conductors such as Jackek Kaspszyk, Gabriel Chmura, Michael Tilson Thomas, Valery Gergiev, sir Colin Davis, and Yakov Kreizberg.

First cellist of the NFM Wrocław Philharmonic, MACIEJ MLODAWSKI studied cello at the F. Chopin University of Music with professors Tomasz Strahl and Andrzej Bauer, and was a guest student at the Hochschule für Musik Augsburg with Julius Berg and Sebastian Hess. Młodawski has developed his skills in numerous master classes with artists including Miloš Sadlo, Victoria Yagling, Claus Reichardt, Kazimierz Michalik, and Johannes Goritzki, and as a chamber musician with Roman Totenberg, Christiane Edinger, Jerzy Marchwiński, Maja Nosowska, Krystyna Borucińska, and Paul Gulda. He is a prize winner of the D. Danczowski Cello Competition in Poznań and the Chamber Music Competition in Łódź. As a soloist, he appeared mainly with the Orchestra of the Wrocław Philharmonic, opening the 2008-2009 season and as one of two soloists alongside Garrick Olsohn on the orchestra’s tour across the U.S. in 2012. He has also premiered Ståle Kleiberg’s Dopo for cello and orchestra in Poland. As a soloist, in a duo with Agnieszka Przemyk-Bryła, and as a chamber musician, he has taken part in many festivals and given concerts in many cities all around the world.