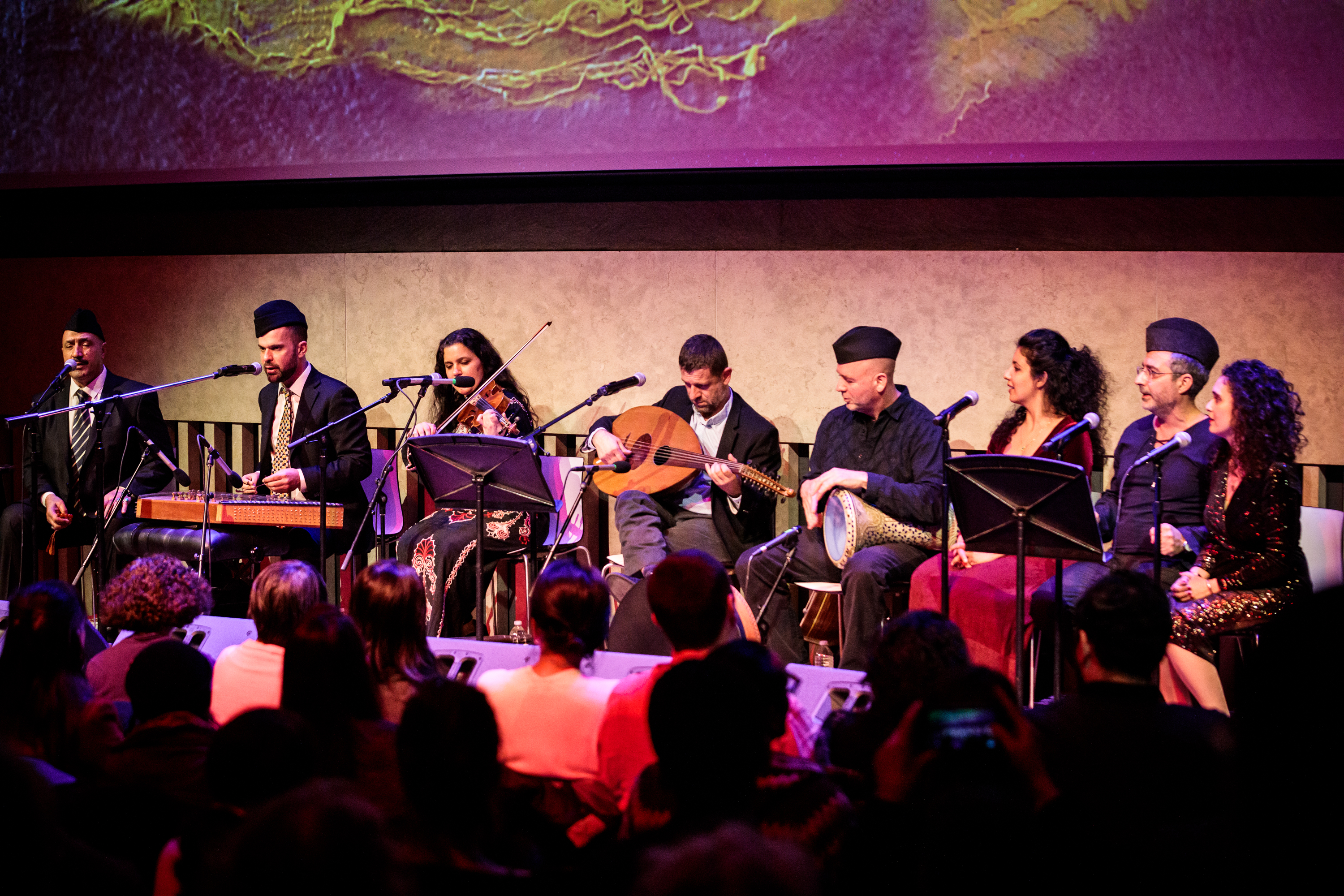 Safaafir is the only US-based ensemble dedicated to performing the Iraqi maqam. The group is led by Amir ElSaffar and his sister, Dena, two American-born siblings of Iraqi descent, who trained in Western music but eventually found their way into Iraqi music. Dena holds a degree in classical viola performance from Indiana University, and Amir is a jazz trumpeter and composer based in New York City who has a degree in trumpet performance from DePaul University in Chicago. Dena and Amir discovered Arabic and Iraqi music independently of one another, and it wasn’t until 2005, at the suggestion of Dena’s husband, percussionist Tim Moore, that the three decided to form a maqam trio. Prior to that, Dena and Tim had been performing together in Salaam, an Arab/Middle Eastern ensemble founded by Dena in 1992 that continues to perform actively today. The three named the group Safaafir, meaning coppersmiths, in homage to Amir and Dena’s ancestry and namesake. For more than 14 years, the group has performed actively for Iraqi, Arab, and American audiences across the United States and internationally. In addition to presenting the maqam in its traditional format, Safaafir incorporates jazz, classical and other Middle Eastern styles to create a highly unique and personalized sound.

Through his powerful and highly ornamented voice, and in his comprehensive knowledge of the intricate details of the music and poetry of Iraq, generations and layers of the maqam tradition resonate through Hamid al-Saadi’s magnificent presence on stage. The only person in his generation to have memorized and mastered all 56 maqamat from the Baghdadi repertoire, Al-Saadi is one of the few vocalists who is keeping the maqam alive today, at a time when so many elements of this profound tradition are in danger of extinction.

Born in Iraq in 1958, Hamid Al-Saadi’s artistic, musical and scholarly journey with the Iraqi maqam began from childhood, inspired by his avid love of the Iraqi and Baghdadi culture, the Arabic language, music and poetry. He studied, practiced, and performed the maqam until he became one of the more renowned and highly acclaimed musicians and scholars in this subject. He learned the art of singing and performing the Iraqi maqam from the legendary Yusuf Omar (1918-1987), who pronounced Al-Saadi as his successor. Muhammed Al-Gubbenchi (1901-1989) who taught Omar and was probably the most influential maqam reciter in history, said that he considered Al-Saadi to be the “ideal link to pass on the maqam to future generations.”

Al-Saadi immigrated to Great Britain in 1999, where he lived and was active for six years as a maqam scholar, singer, artist and writer, and returned to Baghdad in 2004 where he currently resides.  He authored a book on the maqam entitled,”al-maqam wo buhoor al-angham” is one of the most comprehensive texts on the Iraqi Maqam and its poetry that has ever been published.

He is now in the United States on an Artist Protection Fund Fellowship, with one year teaching positions at Rutgers and Sarah Lawrence College. He has also performed at Duke University, The Wexner in Columbus, the Kennedy Center Jazz Club, Old Town School of Folk Music, Princeton University, the Freer and Sackler Museum, the Metropolitan Museum, David Rubenstein Atrium at Lincoln Center, in addition to a number of lectures and private performances at Rutgers, Princeton, and other Universities.

About the Iraqi Maqam.